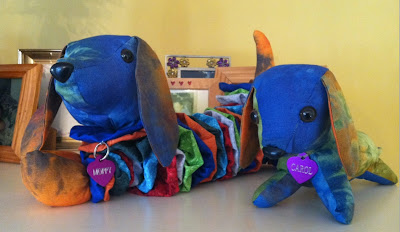 Back in December, I posted about an idea that MOP friend, Susan ("Sooz" for those who know her on chat) had for a present for Herself, Diana Gabaldon.

I was rather vague at the time, because I didn't want the info to get back to Diana and spoil the surprise.  So I put together this blog page, explaining the specifics and told you all to email me if you wanted to get involved.

I found out Diana received her present...so I can finally let the cat out of the bag!

Sooz is a huge fan of dachshunds and heard Diana's family loves them, too.  She decided to make a Dachshund, using all the colors of Diana's Outlander series books for the body of the dog.  We decided Sooz would make and give the gift to Diana for her birthday on January 11th.

At any rate - Sooz finished the project and sent off an adorable dachshund named MOPPY to Diana.  In addition, she made one each for Tracey and me (which was a complete surprise!) and also made us little babies to go with them.

PLEASE join me in saying THANK YOU to Sooz for being a wonderful friend of MOP and a very talented creator of these adorable little dachshunds (which I've told her she should be selling over at Etsy!)

And thank you to all of you who showed interest (and Tracey for trying her hand at some crafting circles!)  Some of you asked about getting involved later on down the line...and I will surely keep you posted. :)
at 1:10:00 PM

Email ThisBlogThis!Share to TwitterShare to FacebookShare to Pinterest
Labels: Moppy