MOP Interviews the Cast of Outlander at the Ziegfeld! 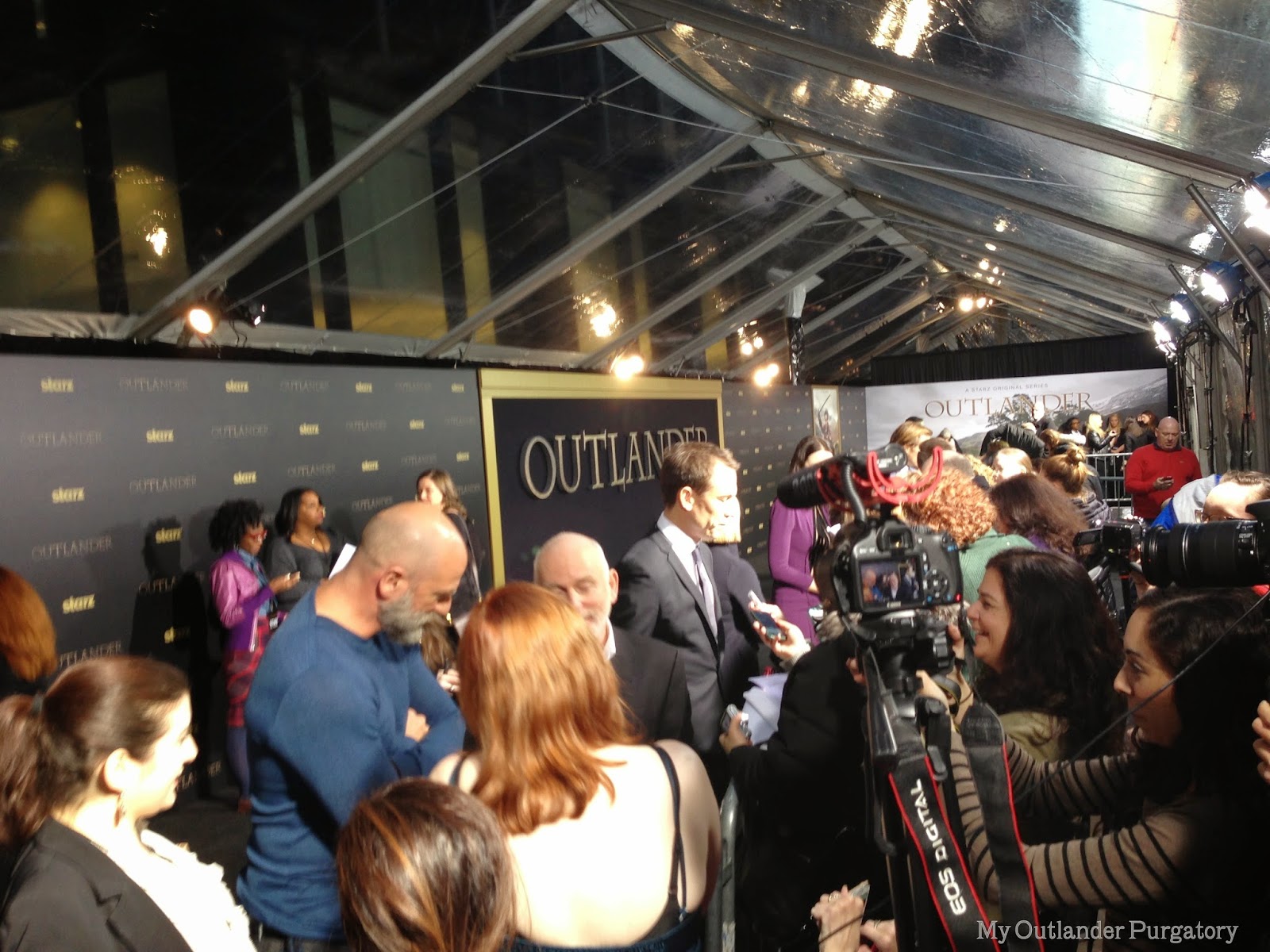 As I'm sure many of you know, many heavy hitters from the cast of Starz' Outlander series were at the Zeigfeld theatre in NYC on Wednesday night for the show's mid season premiere. And as you may *not* know, Tracey and I were lucky enough to be on the red carpet! (Thank you, Starz!)

The event started out with my Outlander friends and I meeting up with Tracey, her Outlander mentor, Emily, and Third Sister Jill at Randolph's in the Warwick Hotel.  We were lucky enough to snag a table near the window, so we could frontload have some refreshments, watch the festivities out the window, and giggle like 7th graders.

After some much needed libations, Tracey and I headed over to the press tent, where we were treated like rock stars by the staff over at Starz.  We had never done a press event like this before and felt really welcomed by everyone we dealt with.

We then spent the next 2.5 hours in our little spot in the press area, waiting for the stars of Outlander and kabitzing with our fellow bloggers/journalists. (We have to send a shout out to Beth from That's Normal for being fabulous and giving us some pointers on what to expect on the red carpet.)

First, we were treated to a conversation with the seriously stunning Lotte Verbeek (TALK about cat eyes!) about the psycho-licious Geillis Duncan.  And as cookoo as Geillis is on the written page and on your tv set, that's how absolutely lovely Lotte is in person.  Not only was she gracious and answered our questions, but she actually asked to have her picture taken with Pocket Jamie.  You have no idea how that made our day.  Can't say enough about this fantastic actress.  (I only wish I'd told her how amazing she was in The Fault in Our Stars):

Was I right?  Lotte Verbeek is a doll.  And an old Hollywood-style star.  I absolutely adore her.

NEXT we were treated to the dynamic duo of Graham McTavish and Gary Lewis. These two were quite a hilarious tag team...and a ton of fun to meet.  We discussed sibling rivalry...among other things!

TELL me you wouldn't want to hang out with these two?  Forget the castle, they are seriously down to earth fellows...and EXUDE Scottishness from their pores.  We were in awe.

NEXT - after I saw him coming and had to regain my composure - we spoke with Tobias Menzies about how much time he spends with Sam off screen during filming, as well as the possibility of plans to bring The Fever to New York.

I had to bite my tongue to stop from fangirling when Blake from OutlanderCast asked about Tobias' role as Brutus in Rome.  My sincere apologies go out to Blake because I know I jumped his train when I spit out, "he was conflicted!" as he was telling Tobias how much he loathed Brutus.  LOL I can't stand when people steal others' celeb moments, but Tobias Menzies brings out the feisty in me.

NEXT we all gasped when Caitriona Balfe came along.  As beautiful as she is on the show, you canna imagine how pretty she is in person.  And I think it has to do with her friendly personality.  She's so easy going and fun to talk to - like hanging with your BFF at the mall - and quite hilarious.  We had a lot of laughs while discussing the three P's: Her version of Purgatory, Pranks on set (or lack thereof!), and who else? Pocket Jamie!

What did I tell you?  The woman is positively adorable.  I have never felt more comfortable around an actor.  She is seriously the real deal.

LAST but as far from least as one could possibly get, we spoke with Sam Heughan.  Sam was so gracious and answered all our questions about his own version of Pocket Jamie, Purgatory, and how Jamie Fraser would feel about the modern day world (those of you who come to chat know how I obsess over that concept; I had to know how he felt about it, too!)


Squee, right?  I mean, seriously.  How do you follow that up?  What in the world do you say after having a conversation with this man?  He's beyond description.  "Nice" is just not going to cut it, although that's what he is.  A very sweet person who doesn't put on airs or give off any feelings of pretense.  Oh and an amazing actor.  So yeah...he's got that going for him, too.  :)

Soooo....after the red carpet, Tracey and I were seated in the theater while the show was already well in progress.  I'll give you a hint as to where it was; "You're tearing my GUTS out, Claire!"  I was in stare-at-the-screen mode instantly.  The episode was fantastic, as all are...and our feelings were thoroughly discussed in our recap video which you can watch here.

The Q/A with the cast was quick...but fun, as they had another showing and were running very

behind schedule (undoubtedly because the actors were so sweet about not rushing us and answering all of our questions!)

I would be lying if I said I wasn't already dreaming about the Episode 1 premiere of season 2...and if we'll get an invite to that premiere, as well.  Whistle, whistle...looks at the sky...

Hope you've enjoyed our red carpet recap!  And stay tuned for more interesting conversations with some other Outlander folks who gave us some pretty important info about what's to come!
at 1:14:00 PM