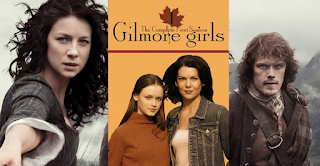 As some of you know from our silly MOP Videos, Tracey and I made a deal: Tracey will watch 3 seasons of Turn: Washington's Spies and I will watch  7 seasons of Gilmore Girls...along with the Gilmore Girls revival released this past Friday on Netflix.

According to Tracey, episode 2 of the Gilmore Girls revival contains none other than...

I am already going as fast as I can, having completed almost 5 seasons (of 22 episodes, each!) in about 4 weeks (don't quote me; I have to check that number. And Tracey has finished 1 season of Turn. Yey, Tracey!) But NOW, I REALLY have to finish, so I can get to the revival...and the Outlander reference!