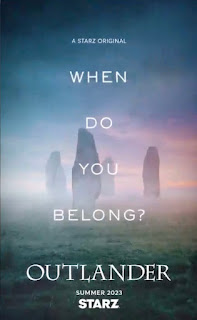 Alright, y'all. A new year, a new season of Outlander. (In life, all roads lead to Outlander. Remember that.)

Admittedly, I'm no a giant fan of US Weekly's ads that pop up in my face when I'm trying to ogle Sam Heughan. But hey, they gotta pay the bills, and this article by Nicole Massabrook is pretty thorough in updating what we can expect in Season 7 of Outlander, premiering this summer! Also have to give Nicole a wee shoutout because she went to Monmouth University, an amazing institution of higher learning. (My own Wee Ian refuses to apply there because it's practically in our back yard and my-man wants to spread his wings a little.) More than a few of us know why Monmouth might be topical in an Outlander post. The rest of you who haven't read the series? You'll have to keep watching, my friends. Lordddddddd keep watching.

“America really is in sort of turmoil. There’s revolution, and Jamie and Claire are separated,” the Waypoints author teased. “There’s also the prophecy of Jamie and Claire’s death, you know, that they’re supposed to die in a fire. There’s just so much going on.” ~Sam Heughan for US

As you may or may not know, depending on how long you've been visiting MOP, all roads ALSO lead to the American Revolution...so you can imagine how stoked I am to get this show on the road. Since things started heading toward "Give me liberty or give me death", I've been waiting for this season with bated breath! Why? Umm...REMEMBER PAOLI!

If I'm honest, I'm hoping the writers/producers/directors are fans of TURN: Washington's Spies...because they did it RIGHT. Every...single...second of that series is gold. GOLD!!! (And the reason I cried at John Andre's sarcophagus at Westminster...but that's a different conversation!!)

Another series that will get you jonesing for Revolutionary War times is Poldark. (Say it soft and it's almost like pray-ing.) le sigh...BOY do I miss Aidan Turner's bare chest. LOL I'm kindof kidding; I'm more into the courtroom scenes when Ross PolDARK is yelling at everyone before going to a hot dinner made by Demelza who, oddly enough, is probably still wearing something resembling rags.

At any rate...I wanted to let you know how excited we are for this summer, and not just because it's margarita season. I also wanted to let you know that Tracey and I will be making a video sooner rather than later...just to catch up, discuss our theories/hopes for the upcoming season, and share some altogether merriness for the new year with you fine people whom we miss so much. ❤️