If it's Not Lawrence Tynes, it's CRAP! 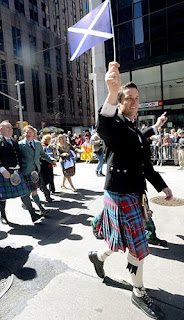 A friend of mine from Scotland (remember Hugh?  Or as I like to call him "Thee Mullet" since he sported a fantastic one back in the 80s) just told me Lawrence Tynes - aka kicker for the NEW YORK GIANTS (whoo hoo! Superbowl, baby!) - lived in his hometown in Scotland until he was about 10 years old.  So of course I did some Googling...and found out he was also the grand marshall of NYC's Tartan Day Parade back in April of 2008.