I've been doing some historical digging this weekend as it's the anniversary of the burning down of the "Union salt works" and dozens of houses and buildings in my town - Brielle, NJ - by British loyalists during the Revolutionary war.  Salt was extremely important in those days for preserving meats and other foods...as well as making gun powder, which was obviously needed in the war.

What does this have to do with OUTLANDER?  Well...I came across something while googling the salt works yesterday, and nearly fell off my chair:

You don't even know the chills I had (or the fit I threw at my husband!) when I read this.  I've been waxing on about the Union salt works being burned down in my own back yard for years...but now I find out that  FRASER'S HIGHLANDERS were responsible?  I'm completely torn and on the fence about it.  On the one hand, I'M AN AMERICAN and they ATTACKED MY TOWN.  On the other...they were Scots...and went through horrific atrocities while fighting the English.  I keep telling myself these men were left with nothing and had to feed their families back in Scotland, and therefore had no choice but to fight for the crown...but wow.  Just...wow.  And it doesn't help that some people say the Scots "flocked to the cause."

(My Scottish-American husband and I just got into a heated debate over this...ME defending the SCOTS!  It's really unsettling, that is for sure.)

Make sure you read the Fraser's Highlander's wiki link; it's chock full of Fraser mentions, Stirling Castle being one of them. 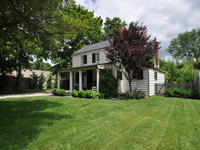 AND - check out this adorable house on Union Lane in Brielle, NJ.  It is believed that this house was the only house on Union Lane that was not burned down in the attack on the salt works in Brielle.  You won't believe how they've restored it.  It's absolutely stunning...and every effort was obviously made to infuse the 18th century feel with the modern conveniences of the home.  Truly outstanding.