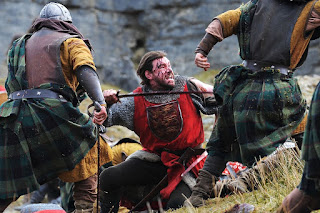 I have become extremely hooked on a new show by the awe-inspiring Kurt Sutter called The Bastard Executioner.  It takes place in 14th century Wales, and those of you who love English rule period pieces (and don't mind some blood and gore) will love it.

And let's just say there may be a certain massive redhead named Lee Jones who may help to fill the Jamie Fraser void over the next few months.  He happens to be the lead character who is fighting to save his country from English atrocities (sound familiar?)...and to say he reminds me of "Exile Jamie" at times is an understatement.  Just look at those cat eyes!! 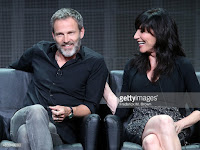 The yummy Stephen Moyer (True Blood "Sookayyy!") and the hella-cool Katey Sagal (Mother of all mothers on Sons of Anarchy) are also leads on the show and are both very different from their characters on True Blood and Sons. SO different that you will forget all about Vampire Bill and Gemma Teller Morrow and completely lose yourself in the story. 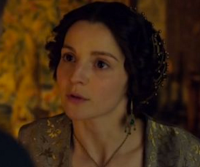 Another lead is the plainly beautiful Flora Spencer-Longhurst...a virtual unknown (in the US) who is beyond realistic as the Baroness Lowry and is referred to by most characters as "Lady Love." The show's make up and costumes department - as well as casting directors - should all be given Emmys...because this woman is so authentic, she looks like she stepped right out of a medieval painting.  And they might as well give her one as well...because she's so believable, you can't take your eyes off her during every moment she's on the screen.

Note: the show takes a few episodes to really get under your skin, so make sure you watch a few before making up your mind.  It's on FX on Tuesday nights at 10PM Eastern.

And let me know what you think!