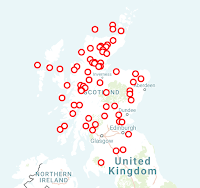 Got an email from Tamara at LochCarron regarding their new, interactive Clan Battlefield Map:

At Lochcarron, we have created an interactive battlefield map that details all the Clan wars that took place across Scotland from the 12th to the 18th Centuries. An added feature of being able to filter battles in Outlander and by the different clans.
http://www.lochcarron.co.uk/scottish-clan-battles-map/
We thought this would be a great way to uncover the rich History of Scotland and it’s famous Clans. Users are able to click on the various battlefield spots to uncover more information on the battle itself and the clans involved.

Wow. This map is so neat (and kindof chilling.😱) You can click each red circle to read more info about each individual battle. (And I know which ones you're all going to click first. 💔)