Our Trip to ComicCon to meet Diana Gabaldon - in Text-Only

For those of you not inclined to watch the videos... (I can't imagine why! wink) 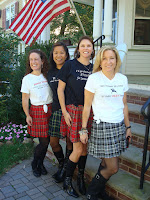 Tracey and I went to ComicCon in NYC on Friday with Jenn M and Shannon, our partners in Outlander crime. We dressed in shirts from the My Outlander Purgatory Shirt Shop - and I have to send a special Thank You to Shannon for not only finding us the $11 "kilts" at Target, but also designing AND bedazzling her own shirt. She's got a future in design (H&M, perhaps? LOL)

We flew through the drop off line  at school - hightailed it into the city - and felt a little strange in our "costumes" while walking to the convention. COMMA HOWEVER - we felt MUCH better when we got around the corner from the Jacob Javitz center and saw Captain Marvel and his wife Wonder Woman pushing their baby, Superman in a stroller. Our "costumes" paled in comparison.

The Javitz center is huge and after some maneuvering, we found ourselves at the door to the room where Diana Gabaldon was going to give her presentation. As people started flooding in, we were able to meet a TON of friends from the internet who participate in daily antics and hijinks with us at My Outlander Purgatory. Deb, Susan, Lady Jane, the ladies from Outlander Book club, PCost, Sally, Aida, Marlene, Erin, Brandy... the list is endless. As we were all getting to know each other in person, "Herself" walked in with the Editor of The Exile, Betsy Mitchell. I'll be honest; we were all a little starstruck. 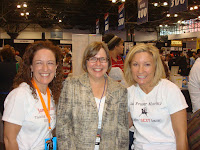 At this point, Betsy Mitchell comes over to Tracey and me... and proceeds to tell us she saw our Exile video and thought it was really funny. My first question "Gulp - WHICH Exile video?" Lord knows WHAT I might have said in any given video. And it's always an odd feeling when someone tells you they saw your video in the first place. You make the things in the kitchen half the time...with no one else around to watch...and you can't really wrap your brain around people actually viewing them.  At any rate, we had a great conversation; Betsy is an absolute hoot and a pleasure to talk to. Then people started heading into the room. As Diana is walking in the doorway, I notice she's talking to Tracey... and I (quite foolishly) say "Hi. I'm Carol. I go with her" and point to Tracey. Really? REALLY Carol? "I go with her"???  I know, I know... quite underwhelming. (You should have seen me when I met John Taylor from Duran Duran in my 20s after loving his band for so many years. All I could spit out after 20 years of fandom was "Great show!" Not too cool... but I digress.)  I'm a better typist than talker, I suppose. Believe it or not, I'm actually a little shy. (Snicker. Stop laughing. It's true!) 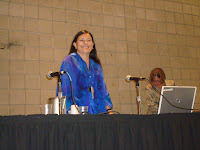 OK - let's move on - Diana and Betsy gave a fantastic presentation about The Exile. How it was made - what it was like to work with Hoang Nguyen - what kind of changes were made to the original sketches, etc etc. I was like a little kid at the movies for the first time. I just sat and stared and took it all in. When you're as interested in a book series as I an in Outlander, it's an indescribable feeling to listen to its author discuss its making... and the making of its visual form. I was in heaven. 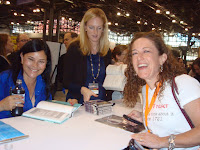 At the end of their presentation, they had a little treat. The played a fan video that showed two fans' reactions to some early excerpts of The Exile. It was a lot of fun to watch... and probably would have been even more fun if I wasn't CRAWLING UNDER MY SEAT IN HORROR because the big noggin on the screen was MINE!! No seriously - it was an unbelievable honor to watch Diana Gabaldon enjoying one of our videos. That's the ultimate honor, really... and it was thankfully bestowed on us. 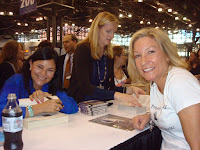 AFTER the presentation, we all went upstairs to get our books signed by Diana. Her signing line was the largest in the Javitz center (poor Richard Hatch) - which wasn't odd as The Exile is the best selling graphic novel in the country, let alone the convention center. While in line, Tracey and I were asked to give an interview to Random House - and enjoyed every second of our 15 minutes of fame (make that 12.) Diana signed my book "To Carol (filmstar!)" and I cannot tell you how great that made me feel. Even though I wasn't capable of forming many words,  she still made me feel special. 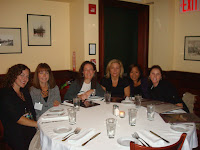 OK - SO - after this we all went to dinner at St. Andrews in NYC - and a special THANK YOU goes out to Sheila from Compuserve for arranging this. We were sitting there enjoying libations with other fans when "Herself" - Diana - walked in - and we were all shocked/thrilled/humbled that she'd actually choose to have dinner with the fans. At this, antics and hijinks ensued at our table (see my pitiful attempt at jokes from the videos for reference) and a great time was had by all. 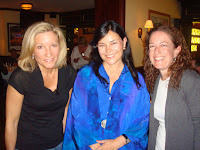 Later in the evening, when it was appropriate (and the poor woman wasn't trying to actually eat her dinner) we approached Diana and gave her a shirt I had made for her. It said, simply, "Herself" on the front... with myoutlanderpurgatory.com on the back. She stood there and listened to a group of us tell her our stories for a good long while... and I cannot tell you how that made me feel. To have someone whose books are so important in your life actually care about what you have to say is a breath of fresh air in a world where almost everyone is too busy or too important to bother with the likes of us.

Sooooo - that is my (very long) story about meeting Diana Gabaldon - and I wouldn't change a thing. She's truly an amazing woman and I look forward to her future works with an eagerness I canna even describe, lassies.  If she writes it - I'll read it.