Carol and Tracey Freak the Freak Out

OK so earlier Tracey called to make sure I knew Diana had commented on my birthday post... and we were both on the phone giggling and congratulating ourselves on being masters of the universe (totally ganked that line from Titanic.) 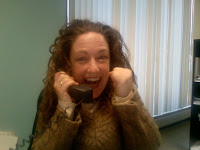 And we were still on the phone when we realized Diana had linked to My Outlander Purgatory on her links page. You have no idea how exciting that is for me. A year ago I found out my neighbor's mother in law had done some work with Diana in Arizona... and I had hopes that some day Diana might just hear about the blog. Just HEAR about it. And I freaked out then, saying "Oh my gosh - maybe some day she'll hear about the blog!"  So today... to see her comment...AND to see that she thought enough of us to link to us on her site... wow. Just... wow.

And I figured I'd never be able to explain to you how excited I was. And Tracey was. Until Tracey sent me this picture of herself freaking out at work. And until I realized my 6 year old son, Ian, was wandering around the house, making a video with his new camera. And do you know what that means?? It means my freak-out was recorded. Complete with my daughter yelling "Be quiet! Be quiet!" SO funny.

PS - Please ignore my messy house! Had I known we were filming, I'd have spruced up a bit!