Jack Davenport. There's Just Something About Him. 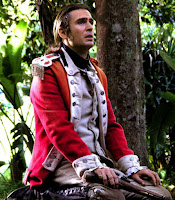 OK so I develop crushes. They come. They go. (And they're usually on British men.) They're always on entertainers of some sort and I've been this way since I was 4 and enraptured by Donny Osmond. Then came Davy Jones at 7. Then came Shaun Cassidy at 9. Followed by John Taylor from Duran Duran at 13.

So lately, I've been crushing on an English actor named Jack Davenport. The funny thing is, I don't know why, since I have barely seen him in anything. Flash Forward; that's it. And it got canceled 8 months ago. But he was good. And yes, he was in Pirates of the Caribbean.. but I'm not the biggest fan of those films... and when watching them, I'm using preoccupied with pondering the minuscule amount of calories that the stunning Keira Knightley must take in on a daily basis.

So it's odd that this Jack Davenport has been popping into my brain a lot lately. This morning I said "That's enough!" and took myself over to Google... to see what all the cranial hubbub was all about. And while looking at some lovely pictures and video of the aforementioned subtly handsome and dashing Brit, I came across the following video. And couldn't help asking... "Jack Randall"?

Now don't anyone go and get your panties in a twist. I'm just thinking out loud. By tomorrow I'll be suggesting anyone from Gary Oldman to Mick Jagger! Or one of his kids! (Or grandkids?)