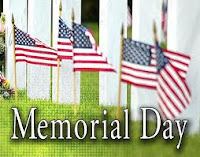 Chat is canceled this evening in observance of the Memorial Day holiday in the United States.  On Memorial Day, we celebrate those who have fought and died for our country.

I'd like to share a link - to the Old Tennent Church in Manalapan, New Jersey.  The church was used as a field hospital during the Revolutionary War, after the Battle of Monmouth.

Many years ago, I visited this church - on Halloween of all days.  My husband and I stumbled upon it...and were fascinated by all the graves and how they were in surprisingly good shape for being over 200 years old.  Today - while looking for a New Jersey Revolutionary War link, I stumbled upon the Old Tennent church's website and was floored to learn that it was started in the late 17th century by Scots who were either sent here as indentured servants...or came to escape persecution by the Stuarts.  (Yes, you read that right; by the Stuarts.)

"The congregation was formed in 1692 by a group of Scottish Dissenters who had fled their homeland to escape James II's severe persecution for their beliefs.  It has occupied its existing building since 1751, and the structure has undergone little fundamental change.

This lovely church once served as a hospital during a celebrated engagement in the War for Independence -- the Battle of Monmouth -- which raged around it on June 28, 1778.  In that encounter the Colonial troops, under Washington's personal command, forced a withdrawal of the enemy which virtually ended Britain's military effectiveness in the northern part of the country.  See also:  More Historical Information and Stories of Old Tennent Church."