Over the River (Near Matson's Ford) and Through the Woods (Between Valley Forge and Philadelphia) to Mother Claire's House We Go!

SPOILER ALERT:  I have read 21 Chapters in Written in My Own Heart's Blood.

Gather 'round now, chitlins, 'cuz mama's got a lot to talk about, mmmkayyy?  Talk amongst yourselves...I'll give you a topic:  St. John's Wort is neither a saint, nor a wart.  Discuss!!

First of all...  Ooooh wheee!  That Willy is all kinds of messed up in the head right now, is he not?!  Boyfriend's walkin' around...all disheveled...trying to keep up this facade of being rich-folk...when in all actuality, hereditarily speaking, he doesna have a pot to pee in!  (Unless it's the lady Arabella-Jane's chamber pot...and he's too highfalutin to peep on top of her low-class peeps so soon after she peeped 'em!)

OK so seriously.  Here's a guy who has been told - his entire life - that he's special.  And rich.  And all of a sudden...BAM!  He ain't worth a dime - figuratively AND literally.  It's got to be completely overwhelming and all-encompassing, no?  You really have to put yourself in William's position to understand why I feel such empathy for him.  His entire world is a lie.  His mother is not his mother.  His father is not his father.  And the very people who raised him and were supposed to protect him have been lying to him all those years.
This poor kid is a ticking time bomb!!  He makes Dallas in The Outsiders look like he's out for a stroll at the convenience store parking lot!!  I don't blame him one bit for hating Jamie Fraser.  (Nor does Jamie, I might add.)

But Ian?  WEE Ian?!?  Dude...you better back the eff UP.  I will NOT tolerate you hauling off and hitting Ian in the mouth...and then being all snooty and righteous and telling the officers HE started it.  Well nanny nanny noo noo, ya poor bugger.  I don't feel the least bit sorry for ya when ye act like a child.  Hell, my 9 year old wouldn't play THAT blame game...and he invented it!  His sister does everything wrong..."I don't know" leaves his stuff around the house...and "somebody" moved it when he can't find it.  Believe me - I know a good bit about acting like a child...and William's doing a rip-roarin' job.

And how about Miss Rachel being all bedroom eyed over Ian's fine arse in the woods...or his johnson private parts under the loin cloth breechclout for that matter!  Girlfriend is in HEAT!  I love it!  Quaker or no, she knows one fine piece of homely, skinny ass when she sees it!  I found it totally bittersweet when Herself said Rachel just liked to talk to Ian...and look at his face (so paraphrasing but you get the gist).  I love that he's found someone who's so gaga over him that she just wants to stare at him.  But it made me sad to think of his face being tattooed forever...and her probably being sad for him, even though he's not sad for himself.  I think those tattoos would probably make me love him more...because it would make him seem vulnerable in a way.  (And we all know how much Carol loves vulnerability in her fictional men!)

Honestly, it kills me to not know what Wee Ian looks like.  I wish someone would sit Diana Gabaldon down with a sketch artist and make her draw him for us.  I've always seen him like Joe Mazzello...but I'd love to know how she sees him (along with sooo many other characters!)

It also pains me to hear Ian rehashing and reliving "Emily" in his mind while filling Rachel in on all the sordid deets.  Ahem...cough bloort coughhhh!!!

Excuse me, I just threw up in my mouth a little at the mere thought of that awful woman.

OK getting back to the matter at hand.  Jamie...cruising along Lancaster Avenue  Route 30  Lincoln Highway  the main road to Philadelphia, on someone's wagon.  Like an even hotter, red-heided Pa Ingalls - trying to get back to Claire...so she can tell him just what she was thinking about, sleeping with Lord John, which he finds somewhat Mary McNabbesque.  (Not sure I remember him meeting back up with Mary for a little third base after that...a la Claire and Lord John...but why split hand jobs hairs).  I have to be honest - I don't really want Claire to get off that easy (pun intended!)  but - again - it's almost easier to write it off than spend a ton of time dwelling on it...just like the situation with Jenny.

So here's Jamie, riding along...and there is FRIGGIN IAN WHO THINKS HE'S DEAD walking alongside of him!!!  Oh holy hell - I sat right up (in my lounge chair by the pool where I was ignoring my family all afternoon) and said "No WAY!!!!!"  (I can't WAIT until we see Ian realize Jenny's still alive, too!!)  And poor Rachel is running alongside the gaggle of lobsterbacks...trying to keep track of where they're taking her Scottish Mohawk man.  (Um, did Ian not tell you to go to Mother Claire and help him get out of this mess?  So whatcha doin' still here, missy??) And then SHE looks at Jamie and almost falls the hell over...which is beyond deliciously fun, no?!

And when Jamie blackmails Willie and thinks to himself "Oh shiz - I couldna even take him!"???  Oh that just did it for me.  I am as entrenched as anyone can be at this point.

It's like Christmas morning when you've unwrapped all your new toys and you love everything...but you've only tested out a few so far and they couldn't tear you away from these new toys if they tried.

- Kindof glad we have't heard from Mother Claire and Hal in the last few chapters.  I needed a break from Hal's asthma and Claire's ministrations.

- Love the complexity of the situation with Ian and Rachel...and Denny and Dottie for that matter.  Religious tradition and its upheaval in one's life always spices up a storyline.

- All y'all have no iDEA how juicy all this Philadelphia burbs stuff is.  Valley Forge...Matson's Ford (which is current day Conshohocken, y'all)...Brandywine...Jethro Woodbine (as in Woodbine Avenue)...it's like Diana Gabaldon was in my class at St. Norbert's and went on all the field trips with me.  Something tells me she didn't sing quite as loudly and obnoxiously as I did on the bus rides there and back...but I digress.

- Jamie has always, ALWAYS acted like a father to William.  So many instances of him showing him tough love...just like a good dad would do.  It warms my heart.  Jamie just walked up to him - grabbed him by the ear (OK not the ear but you know what I mean) - and told him what he was going to do...because it was the RIGHT thing to do.  I have such love for this sad little non-relationship, I canna conTAIN myself.  I can only hope they forge some type of bond going forward, after Willie stops feeling sorry for himself and doing hookers because they insist upon it while being saved from a good buggery.

- Lord John.  Lorddddddd Lord John.  Oy.  That dumb shit has now been taken by yet another band of rebels.  (Oh hush - you know I love him.  He's like family.  That's what family does.  We make fun of each other.  Tracey calls me dumb all the time.)  At least this time he's got the smarts enough to lie about his identity...and tone down the hoity toity English accent.  I can only hope for his sake that he left his sarcastic quips back at camp with Den and Dot. 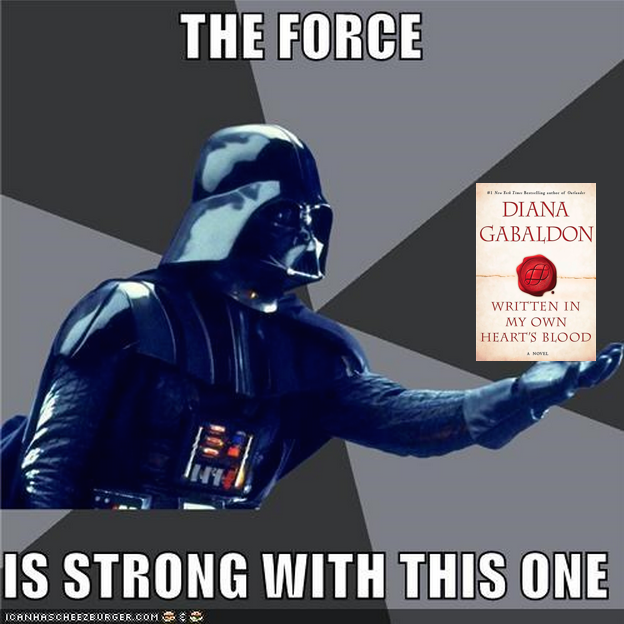 I know I'm forgetting a ton of good stuff but that's what happens when you read, read, read...which I have been doing today.  I am getting to that point where I have no choice but to read, no matter how hard to try to ration my NG (New Gabaldon).