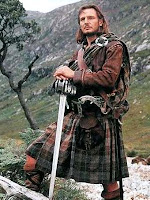 Oh. My. God. Am I the only person in the Outlander universe who hasn't seen this film? It's spectacular!! It's set in the early 18th century Highlands. The landscape is not to be believed. And I just watched a scene between Liam Neeson and Jessica Lang that was Jamie and Claire perfection!! OK, OK... one or two of the lead accents aren't perfect (pronounced "pairrrrrfect") but there are enough true Scots talking in this film to make you giddy for a week.