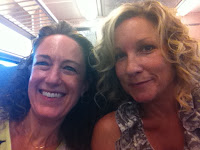 So as you may know, Tracey and I took the train into NYC on Wednesday night to meet up with the folks from Compuserve...and a woman named...what was it again?  Oh yes.  Diana Gabaldon.  It's always a thrill to be in her presence as she is so REAL, I dinna know what to do with myself.

When we walked in, we were greeted by Diana's hubby Doug who said "Carol and Tracey!" Upon hearing this, we both had to hold ourselves steady lest we'd fall on the floor.  I thought, "He knows us?  He knows who we are?"  And right then, as if he heard my inner crazy, he promptly said "I've seen your videos."  Oh no.  Oh noooo.  I immediately told him I am somewhat suprised because - when we're making them - I never really consider that anyone is going to actually watch them - least of all TRJF (The Real Jamie Fraser).  Mortified, party of 1?  Not Tracey...she thinks it's hilarious.  Then again SHE'S not the one who was being a complete moron on the video from St. Andrew's in October.

***And my most sincere apologies to Doug because I don't think we said "Goodbye"!  And I would have loved a picture with him.  (So we could prove to you that he really wasn't running away from us or anything. ;)   Hopefully I'll have my thinking brain on next time.

So anyhoo...we were lucky enough to sit with the awesome Laura, Maria and Giovanna from "OBC" - the Outlander Book Club.  They put up with our jabbering and made us laugh - and even cry ("Dinna fash, there's the two of us now".)

We also met Jane and Maria and Carla (Lady Oliver and her adorable baby, Aisha!) and Sheila who so graciously plans the "dinners with Diana".