The shite is hitting the royal fan, Sassenach!!!

SPOILER ALERT - do not read unless you have finished chapter 38 in Dragonfly in Amber. 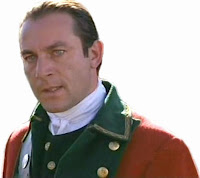 Holy CRAP - I canna believe everything that just went down. I mean - you KNEW Jack Randall would rear his fugly head again at some point - broken johnson or not. But did I think he'd do it in Jamie's SITTING ROOM?!? Um, NOOOO. I canna believe the BALLS on this guy! What if Jamie weren't sick?!  I'm thinking he would have torn Randall's butt limb from limb (as my former classmate Will Smith once sang. Snicker.)  He must really care for his brother. Which kindof surprises me as he referred to Jamie as "Alex" while he was raping him. I still don't know if he was referring to his brother, Alex.. or that poor soul named Alex who he also raped some time ago. Blech. The guy is disgusting... and frankly, I'm surprised Jamie let him live; Frank or no Frank. I mean - the guy is just going to do it to someone else. Look at Fergus!!! Letting him live is like taking a dirty priest and sticking him in yet another parish to molest again. DISGUSTING, Sassenach!!!

Why do I feel the need to type like Jamie? I canna figure it out for the life of me.

You know what this blog needs? Some Scottish commentary in the comments section. Let's work on that, y'all.... mmmmkayyy??