More Fun with the Frasers 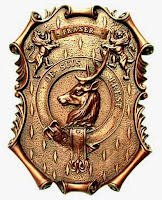 So I'm watching the Fraser videos and I'm seeing photographs of Frasers who fought in South Africa in the early 19th century. And I'm thinking "These were descendants of Jamie Fraser's family!!" And then I think to myself "My god! Jamie Fraser is a fictional character! I...am... LOSING IT!"

And here's another thing that's kindof cool to think about. What year did we leave off in Echo? 1778? Simon Fraser died in London (ahem turncoat ahem) in 1782. (He was the son of Simon the Fox who was briefly imprisoned and later got all the Fraser lands back by jumping into bed with the British government. Not that I'm judging or anything.) Could we get a glimpse of THAT storyline, perhaps, in the famous upcoming Book 8???

And here's the thing that bugs me. Should I be annoyed with the Old Fox's son, Simon, for seemingly kissing the British government's  ass in the 18th century after Culloden? Should I consider him a turncoat? Or should I assume he did everything he did (including becoming close with the British Prime Minister and living on Downing Street in London when he died) in order to win back his father's stolen lands, no matter what the cost to his personal integrity? Perhaps it's a mixture of both.

Again - a big thanks to "L" for posting that link and getting my Fraser juices flowing today. I needed it.
at 9:28:00 PM