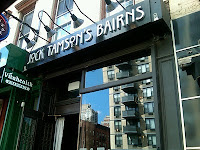 Stopped by Jock Tamson's Bairns in the city yesterday with Tom and the kids. It's the only authentic Scottish-owned and run bar in NYC.

The owner's name is Gavin and he's from Glasgow. He's a funny guy who was suffering from a bit of a hangover from the previous evening; the poor guy did not look like he was having a very easy time of it. And yet, he was still really friendly to my family.

The bartender (and "musician by trade") is Aiden. Aiden MACKENZIE. And he's from THE HIGHLANDS. Just above Inverness. And while in the midst of conversation, the man actually floated the S-biscuit. Wondering what that means?

That means a Highlander named MacKenzie looked me in the face and casually used the word "Sassenach" in regular conversation.

I can now die a happy woman.

Jock Tamson's Bairns is fully stocked with every whisky imaginable. They're a cozy little joint with lots of Scottish feel - lots of it exuding from the plentiful Scottish accents behind the bar.  Aiden knew his whisky inside out and backwards - and was more than happy to share that knowledge with me...right down to theorizing about its origins.  (And theorizing about the Picts. Fascinating guy... absolutely. He even made me a whisky-based concoction called " The Aiden" - and didn't make me feel a bit uncomfortable for not ordering it neat.) The place has an authentic tin ceiling... and a couple of couches at the end of the long bar.  Most likely these are for taking a load off whilst you text your friends and say "JESUS GOD, A HOT MACKENZIE FROM THE HIGHLANDS JUST SAID "SASSENACH" TO ME!"

Not that I did that from the couch or anything...