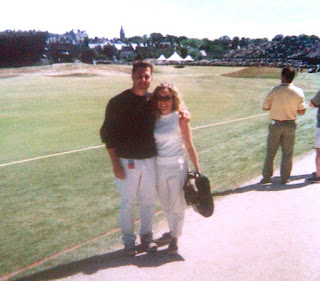 So I was just watching Louis Oosthuizen accepting the cup at the British Open at St. Andrews... and I am so bummed it's over! It's been on all weekend (DVR'd of course. I don't know about you but I'm not getting up at 4:30 AM to watch golf) and I've loved seeing and hearing so much Scotland!

Christie asked about the new background. It probably is just temporary but I am lucky enough to have a friend named Hugh from Scotland who takes pictures for me when he goes on holiday...and he took this one on his trip to Glencoe. And those appear to be lights along the loch (they aren't showing up on my screen; web design is an odd thing).

Here are Tom and I at St. Andrews in 2000 for the British Open. This was one of the greatest days of his life. Right up there with our wedding and the birth of his children. The man loves golf... and the man loves Scotland.  That's a rain jacket I'm holding...you know... for "just in case". It was surprisingly sunny on our trip and Tom was annoyed. ANNOYED! He wanted rain! He wanted mist! He wanted chilly conditions - and the powers that be dared to give us sunshine! In Scotland!!
at 2:11:00 PM