Flocks of a Feather

SPOILER ALERT: Dinna read unless you've read Chapter 60 in A Breath of Snow and Ashes.

I canna believe how much I've come to love Bobby Higgins. That letter from John Grey killed me.  It was verra sweet of John to go to bat for Bobby like that. "Well, Jamie, please talk Lizzie's dad into letting her marry Bobby. And if that falls through, give it a shot for Malva with Tom Christie".  And what then? Who is low enough in the totem pole for poor Bobby?! And he is better than all of this! And isn't he sweet, putting on his Sunday best to speak with Jamie and Mr. Wemyss? And then what happens?! SHOT DOWN!!! With a slight little "I'll think about it but most probably not." 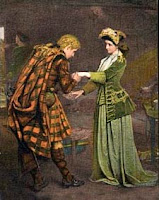 OK so let's back up a little bit. Flora MacDonald. Don't think I like her. A little too important to be captured for my taste. And WHAT was with the odd look she gave Claire when she first met her at River Run? Maybe that wasna the first time she met her. Or maybe she'd heard stories. Or maybe she's got a sick crush on Jamie even though he's like a million years younger than her. Kindof like Rob Pattinson is a million years younger than me. Yeah. Let's let that one go for now.

I. LOVE. DONNER!  Why on earth did Bree and Claire just sit there and let them haul his arse off to jail? Yeah yeah - he escaped - and now we don't know where he is. But still! They just SAT there. They go to bat for everyone and everything - but for him, they just sit there. I get it - he ran around with the band of thugs who kidnapped Claire. But he was trying to help Claire. True, he's a wimpy little shite who watched a heap of walking filth just go around killing people at random - but again - I think he did enough to try to help Claire that they should have at least spoken up for him, even though it probably wouldna have done any good. And he's from the future. They canna just let him die without pumping every last bit of info out of him that they can (which I believe they were trying to do until Claire dragged poor Jamie's ass into the brothel where we heard even more stories of his good deeds.) And if nothing else, Donner actually uses terms like "gnarly". I'd keep him around for the conversation alone.

Tar and feathers - awesome. Jamie at his finest - and it just showed me that Jamie is going to be verra influential and so sitting down to a meeting with John Adams in about 30 seconds. I'll bet Abigail is brewing the acorn tea for the Fraser womenfolk as I type. And Hel-LO - when Ian and Fergus came to his side (sighhhhh Fergussss... that man is so sexy it's shameful) and did their little hop-up number to pull down the mattress? Priceless. Absolutely priceless.

OK that's it for now, lest I make you yawn with all my chatter. I'll leave you with this thought:

If those Ridgers don't leave poor Roger's preaching/singing/sweating alone  - I'm going to grab that snake out of Jamie's shirt - no, make that Claire's pocket - and whack them over the head with it. Although, might I say that when that snake came up under Jamie's chin,  under his shirt, I truly almost coughed up a lung from laughing so hard. Seriously.
at 11:18:00 PM