Give Me Liberty or Give Me Death

SPOILER ALERT: Dinna read unless you've gotten 3 or 4 pages into chapter 65 in A BREATH OF SNOW AND ASHES.

What's with this Wedding at Cana writing style of yours? I love it! Just when I think things are slowing down, you change the water into wine and start serving up the deliciousness!

Yours in Christ (and Jamie Fraser),
Carol

Seriously - I CANNOT believe what a turn this book has taken. Then again, I suppose I can believe it, after previous books that went along their merry way until PRESTO! They took off like a bat out of hell.

I am going back to reading now because this part is SO good and I only have a short free time window in this insane asylum I call my house. But I'll tell you this: I am at what I believe to be one of the most powerful - if not THE most powerful - moments in this series.

Jamie just declared himself for liberty. That is HUGE. Put yourself in his position. He's an honest, hard-working man who spent years at the mercy of English rule - fighting for Scotland and suffering subsequent punishment - and has finally found some peace. And he now has to put every ounce of faith and trust into his oddball, time-traveling wife's notion of a Revolutionary War -  and declare himself a rebel. When all he really wants to do is stay out of trouble and avoid fighting like the plague. It's mind-blowing how huge this is.


I am more than nostalgic for where I grew up right now. No shocker as I've waxed on previously about my hometown bordering Valley Forge. I used to drive to my friend Katie's house and pass cannons and log cabins along the way - and think absolutely nothing of it. Dinna get me wrong - I respected the hell out of what took place at Valley Forge. But it was what it was; I lived there. I had to drive through the park (Bitterman) to get to the local shopping center!  Seriously though - I went through a Revolutionary War obsession in the 4th or 5th grade... and even had wedding portraits taken at Valley Forge Park in front of a log cabin (Tracey is right now going "OMG I totally forgot about that!) And now - wow.  Reading this book...I'm dying to go back. Tracey - Shannon - Jenn M. - and anyone else who wants to join us, I have one thing to say:  ROAD TRIP!!!!!!

PS - Check out these pictures taken by a fellow named Adrian from England who lives in PA now and has a personal website at adrianc.com. I have posted one of the inside of a cabin, below. Can you imagine Jamie, Claire, Bree, Roger and Jemmy all sharing ONE?!

ALSO - click this link for some fascinating information and links regarding Valley Forge and George Washington's troops camping there (what was left of them) for 6 months. 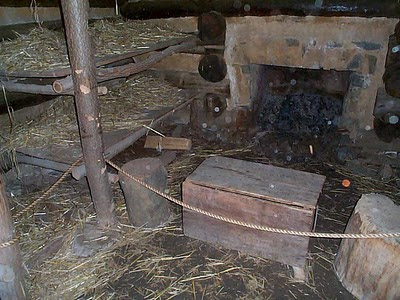