"YOU CAN'T HANDLE THE TRUTH!"

SPOILER ALERT: Dinna read unless you have read chapter 20 in AN ECHO IN THE BONE. 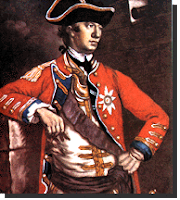 I've been fighting it. Fighting William. I didn't really want to be interested in his life; it just... happened. And now I'm stuck. I am moving on to Chapter 21 - "The Minister's Cat" (which makes me giggle, as I love Bree and Roger's little game) - and I'm finding myself a little bummed; I want to know what happens! Will he take Richardson's offer and become a spy? I think not. I thought he was going to - until this horrible situation with Hale. And now I'm thinking he's going to say "no", now that he's gotten a taste of what it feels like to watch someone die - indirectly - by your own hands. Or your own actions.  I'm thinking William is going to realize it's better to kill someone outright on the battle field... than take part in killing someone by sneaking around lying and hiding. There is honor in fighting fair. And I have a feeling that William - like both his fathers - will choose honor.  I can't wait to read on and find out.

PS - Speaking of The Minister's Cat - am I the only one who gets a little giddy every time a new chapter starts with the word "Lallybroch"??
at 11:50:00 AM