A Printing We Will Go

SPOILER ALERT: Dinna read until you have finished chapter 7 in AN ECHO IN THE BONE. (I still CANNA believe I'm finally reading the last one.)

Oh for the love of god. Could someone get Bree out of Roger's ass, please? She's camped so far up there that his hemorrhoids now have hemorrhoids. Seriously. Leave the guy alone. It's a bit traumatic, following one's girlfriend to the 18th century - marrying her after learning she's possibly had another man's baby - living with her crazy-assed family - being hangit - working on a farm - and traveling back through yon stones to your own time... is it not?? If he's meant to be a Minister - he'll be a Minister. Get off his back and go see what Annie's doing in the kitchen. Let's hope it's not what you and Roger were doing on the currant-stained granite last week. Word to the wise - I'd pay close attention to what Annie's doing. I only just learned she was their "hired girl" at Lallybroch and already I'm having visions of Malva. Shudder. 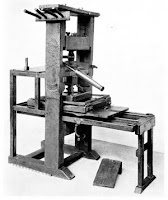 So I just read Jamie's letter - the 2nd of the bunch - about going back to Scotland and retrieving his printing press. I am DYING to know if that is going to happen in this book - and if they're going to come all the way back in Echo, too. In all honesty, I'm envisioning Voyager on steroids - and getting a little nervous about the prospect. And where the hell is Mr. Willoughby with yon wee stabbers when we need him???

I have to say - reading Jamie's signoff - "Kiss the children for me" and "your most affectionate Father" made me spill a few tears. It is just hitting me now that Jamie had to give up his daughter yet again. And that hurts me to the core of my being. AND - that Bree had to give up her father - whom she was never fortunate enough to meet when she was a child - because her mother waited 20 damn years to find out what happened to him. And now here Bree and Roger are, going through these letters from Claire and Jamie at a snail's pace... and I'm on the edge of my seat!! Would you not TEAR INTO those letters like it was Christmas morning and you were in your best plaid Christmas nightgown?!? HELLO??? I could not wait one more SECOND to know what happened to my PARENTS!!!

OK that's it for now. Going to visit the in laws - and I'll have a nice chunk of time on the plane tomorrow to read (if my children behave, that is.) And yes - the laptop is-a-comin'. So there will be blogging - and Monday's chat is definitely still on!
at 6:07:00 PM