SPOILER ALERT: Contains info about the entire Outlander series.
Went to the Bonnie Brae Scottish Festival in Liberty Corner, New Jersey yesterday with Jenn M. and Shannon. Had a GREAT  time! We were like little kids in a candy shop. All giggly and embarrassed and full of "look over THERE!".  There were lots of things to buy, people to meet and vinegar fries to be eaten. (Wolfed down, really. They're so damn good.) 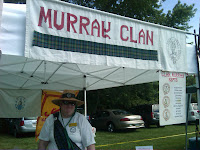 First we headed over to the Clan tents and searched for a Fraser tent (duh!) but - sadly - there was none to be found.  I was tres disappointed. But we DID find a tent for the Murray Clan and this lovely woman was kind enough to let us take her picture. We also checked out the Campbell tent  (a family which appears in Shannon's lineage) and they were verra lovely as well. Although some dude yelled out "I'm a MacDonald!" and I had a strange desire to back away slowly.

After that, we headed over to the merchandise tents where we made more than a few purchases. Jewelry... t-shirts... I even bought a Fraser hunting tartan scarf (come on, cold weather! Whoo hoo!) I also got a magnet for my hubby that boldly states "Up Your Kilt!" - a phrase he taught both of my children the second they were old enough to hold up their sippy cups and say loudly in whatever restaurant we were sitting in at the time.

Anyhoo.....while at these tables, we found a booth that sold swords and dirks. It. Was. So. Cool! Here we are, sampling the merchandise. I was a wee bit nervous about being near all this metal. And yet - it rocked. 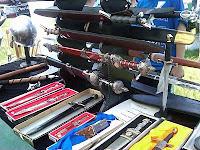 The swords and dirks were totally cool and reminded me of Jamie  helping Roger pick out a sword with which to slit Stephen Bonnet from ear to ear.  (Must... read...scene...again!)

After that, we found our way to the historical area of the festival where we met reenactors dressed as members of the 42nd Royal Highlanders in the British army. (And there's Mrs. Bug in the background!) They were so great - gave us lots of good info - and will be doing a reenactment of the Battle of Monmouth on Saturday, June 19th in Freehold, NJ. 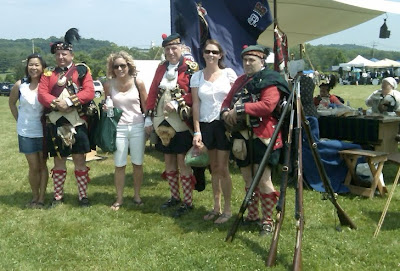 All in all - we had A GREAT TIME and I urge any and all of you who a) love the Outlander series and b) have a penchant for 18th century Scottish and American history - to find a day of Scottish Games in your area. You will learn a lot - you will meet some really great people - and pick up some really great things to take home. Trust me; you will NOT be disappointed!!
at 11:25:00 AM