Something Wicked This Way Comes

SPOILER ALERT: Dinna read unless you have read Chapter 41 in AN ECHO IN THE BONE. 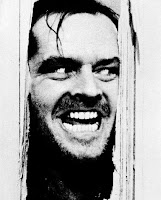 "It's not hell after all, then-only purgatory. What's another thousand years?"
How much do I LOVE when DG talks purgatory?? (Or Stephenie Meyer, for that matter, but that's a comment for another blog.) I don't know why I love the concept of purgatory. God - that sounds terrible. It's not that I love the concept.. it's that I'm intrigued by the concept. I always wonder if maybe this is purgatory... if life is purgatory. And when it's all said and done - we either go up - or down.

How much do I love William and Ian hanging out together (I say "hanging out" as if William wasn't on his deathbed the entire time)... Ian calling William "Cousin"... kindof rolls off the tongue like Henry Ian Cusick saying "Brotha" in that sexy way (LOST was a repeat the other night and I was NOT happy).  And how much did the bear claw necklace make me go :O  <---- That's a shocked face for those of you who haven't been schooled in dorky emoticons like myself. And he put it right on. Because he is the son of the Bear Killer and will most likely/hopefully kill his own bear one day.

I'm wondering lately if Lord John will make it through this series. I have to wonder if Jamie will some day take ownership of William and get to be more than "my dad's bud who is tall and lives on the Ridge". NOT that I want to see Lord John meet his demise... but... I dunno... it could be kindof a cool storyline. Let's be honest.

OK so I'll admit it. I was more than thrilled to hear Ian tell Em - Em -  Satin's spawn - that he was going to Scotland. Here's what I have to say to her at this point in the series, if I may quote Billy Bragg:

She doesna have one ounce of my sympathy for her sad little life. She made her bed when she married "Ass Who Steals Wife of Odd Scottish Indian" and now she has to lie in it, doesn't she? In the words of Tony Soprano's mom, "POOR YOU".  And when she asked Ian to name her daughter? OCH! That took all the MMMPPPHHHHMMMM I could muster not to jump into the damned Kindle and punch her in the nose. Ian took the high road on that one, too. Although I must admit -  I do think I dig her son - what's his name - Fast As Shit Lizard or something like that (forgive me but I'm too afraid to search "Lizard" on the Kindle for fear it will come up a zillion times and then I'll know he's in further chapters. I didna come this far - 53% of Echo - to get spoilers now!!) I think he and Ian would have a relationship like Jamie and Fergus (sighhhhh Fergus... havena thought of him in a while) and I wonder if we'll see him again. Hopefully only if there is a tornado and a longhouse lands on Em - Em - oh forget it.

OK so how about the 2nd coming of the Beardsleys - aka The Johnsons!!! WHAT NUTJOBS!! Mr. Johnson was a burrito short of a fiesta platter, to be sure! That was one of those scenes I would just LOVE to see on the big screen... kindof like the mother in law's funeral in - oh god, was it The Fiery Cross? And what was her name? Yikes lassies - I am tired. At any rate - it would just be so incredible to see that axe coming down and William rolling out of the way... very spooky like Jack Nicholson in The Shining.

Lastly - did I not LOVE when William head-butted Mr. Johnson INSTINCTIVELY??? Hey William... you can run... but you can't hide with your big ol' Glasgow kiss! You're as Scottish as a lovely HAGGIS, my friend... you just don't know it yet.