SPOILER ALERT: Dinna read unless you have a) seen "Dear John" and b) have read Dragonfly in Amber.

I was just watching "Dear John" with my hub... again. I love that film. Hub likes it but they lose him toward the end when Savannah gives John this speech and tells him how life was just as hard for her as it was for him while he was off fighting. And my husband's like "oh PLEASE! POOR YOU!" at the TV. "He's off risking his life and she's home and she thinks she has it as hard as HE does?!"

And of course this reminded me of Jamie and Claire. I'm uber-sensitive right now because I'm teetering on the brink of insanity, reading Dragonfly whilst waiting for The Exile to come out on Tuesday. And it hit me all of a sudden today.... the reason DinA was so difficult for me to get through in the beginning is because we know - beyond the shadow of a doubt - that Jamie Fraser never got to raise or even see his baby girl. We know that Bree knew nothing but Frank Randall as a father... and we know that Claire went back through the stones pregnant. So even during the first read, when we're walking around in a daze because we don't know why Claire went back... we know what didn't happen. And that's upsetting as hell.

And that's why some of us have such a hard time seeing Claire's life without Jamie as being as difficult as Jamie's life without Claire...no matter how many of Frank's boring stories Claire had to suffer through. (And lorddddddd she suffered through them. Of that, I'm sure.)

Now here is a random Channing Tatum shot because I just like looking at him. So what if his eyes are kindof cat like and he's got high cheekbones and a reddish tinge to his hair and a long straight nose and monstrous shoulders? So what?! He's not even Scottish. He's not even British for that matter. Can you imagine his Scottish accent? It's probably horrible! (Keep telling yourself that, Carol... just keeeeep telling yourself that...) 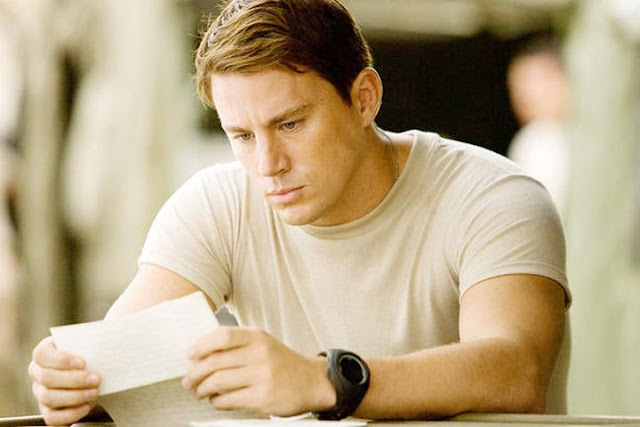